How do you arrange your books?

"Brett...busies himself organizing her books.  I can't discern his methodology -- colors, shapes, alphabetically by author or title?"  Quote from To The Stars Through Difficulties by Romalyn Tilghman


"A library outranks any other one thing a community can do to benefit its people. It is a never failing spring in the desert."

To The Stars Through Difficulties by Romalyn Tilghman.

Not finished yet, but so far I have found this a most interesting fiction book. Three women are the main characters developed in the writing style so many authors use now, where one chapter is in one character's voice, the next chapter in the another character's voice and so on.  I'm still out on IF I like that style of writing, but it works for this particular story line.

In the background tying all the characters together is the story of Andrew Carnegie building 1,689 libraries across America. (All total, Carnegie built 2,509 libraries when including the ones built in foreign countries.) 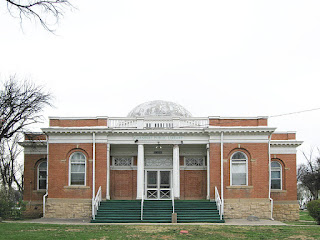 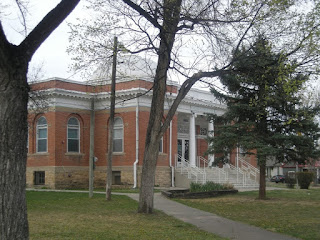 Personally, I've only seen one Carnegie library, which was located at 500 National Ave in Las Vegas, NM. It is on a huge piece of land in town. I went to Las Vegas for a library conference.  Only three Carnegie libraries were built in N.M.  Besides Las Vegas, Roswell has one at 123 W 3rd St, but today is empty and Raton's Carnegie library faced the wrecking ball in 1969.

It is always an added bonus when a book, even a fictional book, intrigues you to further  investigate something you read within the story. In this case, the story is located in Kansas where Carnegie built 59 libraries. The Kansas state motto is  "Ad Astra per Aspera", translated means "To The Stars Through Difficulties", which is the title of the book.  Definitely different.  So, of course, the next step is for me to check out New Mexico's motto: "Crescit eundo", which means "It grows as it goes".  OK, also different and how does that pertain to N.M.?  Now a motto is different than a slogan for a state.  A motto often appears on the state seal and sometimes the state flag.  Whereas a slogan, such as NM's "Land of Enchantment", appears on license plates, advertising and so on. Although, NM now has another slogan with the "NM True" advertising campaign.

It is interesting to investigate mottos and slogans of other states on Wikipedia.

Sideline: Hey, remember the game when traveling when you were a kid and trying to collect licence plates from all 50 states?  No, not literally collecting, just notating. Easy to do back then when the individual state plates all looked the same plus you could read the state slogan.  With the proliferation of  custom plates today, it is a much more challenging game.

With regard to the book, since this is suppose to be a book review of sorts, in my opinion it is well written .  The author's use of adjectives, action verbs and analogies create excellent visualizations to "see" the story. Plus, Tilghman portrays librarians in a most positive light, almost placing them on a pedestal that necessitates adoration and adulation.  At first I thought the author must be a librarian, since she gets our feelings of competence, satisfaction and tolerance spot on.  Take this example from the book:   " It wasn't till grad school that I got the sense of power librarians feel in making suggestions to readers or in matching researchers with their resources.  One cannot help but feel smart when handing over just the right book." And another quote  "Does Elena mind when she spends a whole afternoon getting books in perfect order only to have a patron shuffle them to chaos?  There are two kinds of librarians.  The kind who want to know everything in the universe and the kind who want to categorize everything."

Enough. I'll get off  my soapbox about adoration of libraries and librarians. I do tend to read a book if the synopsis says library or the main character is a librarian. In closing, this is a woman empowerment feel-good story. The publisher is She Writes Press, an award-winning hybrid publishing company for women writers.

IF you would like to write a book review for the blog, email shenstewcat@gmail.com
Submissions will be reviewed and possibly edited as needed

What better medium than a library blog to share your love for books by sharing reviews of books you've read.

Only patrons of the Capitan Public Library may comment to blog posts.