At the library on the Fourth of July 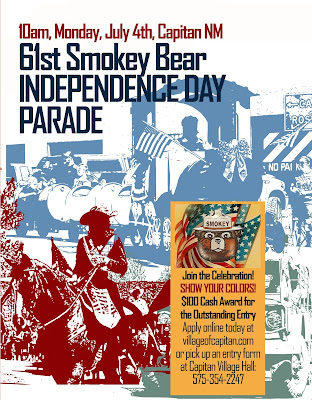 ​Capitan Public Library July 4th (MONDAY) Bake Sale & Hot Dogs/Sausages.  Come early in the morning for the Bake Sale (items go fast!) and a cup of coffee.  Then come by again at lunchtime to enjoy our shady garden area, the parade and these delicious treats:

PLUS - we will have a $5 for a bag of books on July 4th (as well as the usual first Saturday of the month book sale on July 2.

Watch for the Capitan Library float in the parade.  The theme for the parade is "Show Your Colors".  Our young Summer readers will be riding the float celebrating Capitan Public Library's 20th anniversary with patriotic colors!

Can you believe that -- the community has been enjoying this volunteer library for 20 years!  Show your support of the CPL by buying your 4th of July treats at the library or showing your love of the library with a donation.

A $5 donation to support a child for the summer reading
program entitles you to either 2 free bags of books or 2 sodas/water on
Monday, the 4th.

Posted by Sharon @ the library at 7:57 AM No comments: 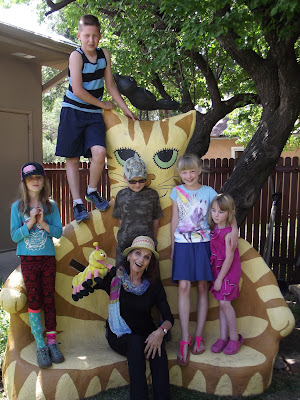 Theme for this year's summer reading program: On Your Mark, Get Set ...READ!  Week 2 Summer readers decided to spend  the beautiful day outside.  For information: Call the library at (575) 354-3035

Posted by Sharon @ the library at 8:50 PM No comments:

July/August Artist in the Library: Drawings by Linda Ferguson

Linda Ferguson stays busy with commissions by drawing at home and during lunch hour at work. Her art is meant for the emotional connection of others


When she was in kindergarten, Linda Ferguson was compelled to color within the lines and draw the prettiest picture. By junior high, she sold her first piece of art.  But the only subjects that really interested her were horses, down to their smallest physical feature and the stitching on their tack.

No one else in her family was artistically inclined, but Ferguson realized early in her life that, "...if I can see it, I can put it on paper."Her medium of choice is pencil, although she does acrylic on rare occasion and pastels. She works mostly from photographs.  "I've always drawn, it's just a God-given gift," she said.

She never planned to sell her work, but as she became an adult she realized her art was of the same quality of many others being sold.  "It's a different artistry," she said. "I am not creative. My love is to produce something very specific to the individual that means something to them. I don't just go home and draw. I rarely draw unless it is a commissioned piece of work."

Ferguson never studied art.  "I've been asked a couple of times why don't I teach," she said. "I tell them that I don't know anything about art."  She doesn't advertise her work and doesn't do shows.

Ferguson moved from Fort Worth, Texas, to Ruidoso 19 years ago. She works for Ferguson Plumbing Supply, but is not related to the owner. She quickly became everyone's go-to consultant as she exercised the same methodical approach to sales as she does to her artwork.

Initially, she would use lunch hours to work on her art at a drafting table in her office.  "I would hang a picture or two at work and had an art table," she said. Customers would see her work there or while thumbing through a book of her pieces she left on her desk to keep "antsy" clients occupied while she filled out the paperwork on their orders.  "A lot of my customers are from Texas and they would tell their friends," she said.

With specific requests, she broadened her subject matter to portraits, race cars, vintage cars, dogs, cats, and objects that were meaningful to the person commissioning the work, such as a windmill or wagon.  But she isn't into landscapes or cluttered backgrounds. She prefers boiling a picture down to the subject.  "I call it getting rid of the background noise, eliminating all but the subject of the picture, having nothing in the background to distract from that," she said. "Now the subject is just the cowboy and his horse. It's more personal."

An average commission could take from four to six weeks.  "This year, it's been busy, nonstop," she said. "But it's a variety. I can do none or be busy the entire year. Because I don't go seek the work, if it comes along, it comes along. If it doesn't, I'm still happy. There is more time to ride my horse and motorcycle with my husband and do other things."

Ferguson draws from left to right to ensure that her hand is not on the picture.

"So it develops finished as I go along," she said.

The first time she posted a progression on her private Facebook, the response was "crazy" and now she regularly follows the development, ending with a "meet the subject" introduction when a drawing is finished.

"I have found when I visit with other artists, that is not the way they draw," Ferguson said. "We all do it our own way. As it develops, I'm excited too, because you start with a blank piece of paper and all of a sudden you have things there. I'm just as anxious to see what's happening as it develops."

When people ask her how big the portraits are, Ferguson said, "I say the right size."

"It's detail work. I use a magnifying glass to see the details and to draw when it gets to the fine details," she said. Her husband came up with that aid about 10 years ago when her ophthalmologist told the artist she had "terrorized" her eyes.  "I wished I had thought of that earlier," she said. "I can't believe I wasted all that time struggling to be so detailed without it."

Ferguson said she wants her work to look perfect up close as well as from a distance with every buckle, ring, stitch and strap in the right place. If a buyer is dissatisfied with a finished work, they are not obligated to buy and "everybody is happy," she said.

Over the years, she's displayed her work at the Oso Art Reserve in Capitan and the Dolan House in the Lincoln Historic District. The Hubbard Museum of the American West commissioned renditions of the wagons in the museum's collection and hung them for several months. She doesn't often run prints of her work, but has a few for sale.

Ferguson had hoped to pass along her artistic ability and her love of horses to her two children, but although both could be artistic, they followed other paths and neither is a horse enthusiast. In her downtime, Ferguson rides her quarterhorses Sienna and Durango, or motorcycles with her husband, Steve. 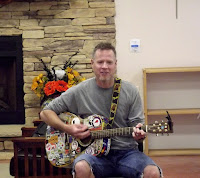 Capitan Public Library kicked off the Summer Reading Program with Andy Mason on Monday, June 6.  Andy has been the lead-off performer for several years.  Singer, musician and a man of many talents, this was his second event, with 50+ for the rest of the summer.  The program will run through July - Mondays from 10:00 to 11:30.

For more information about Summer Reading Program or to donate to the program, come by or call the library at 354-3035 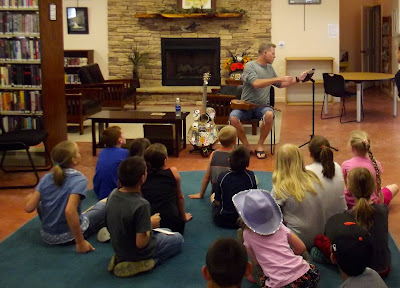 Posted by Sharon @ the library at 9:22 AM No comments:

THIS blog has a mind of its own.  I truly believe it.  It does what it wants to do and only WHEN it wants to.  Far be it from me to try to control it.  "The medium is the message"* is what I learned in Journalism 101 in college. But maybe this blog is channeling HAL.

HAL:  "I know I've made some very poor decisions recently, but I can give you my complete assurance that my work will be back to normal. I've still got the greatest enthusiasm and confidence in the mission. And I want to help you."

Sharon:  "HAL, you got to help me out here, not make me look like an idiot!"  Aside, whispering so HAL can't hear , "I THINK this blog definitely has idiosyncrasies or issues like a real person".

*"The medium is the message" is a phrase coined by Marshall McLuhan meaning that the form of a medium embeds itself in the message, creating a symbiotic relationship by which the medium influences how the message is perceived.
Posted by Sharon @ the library at 7:00 PM No comments: