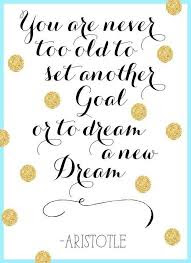 Free computer classes at the library 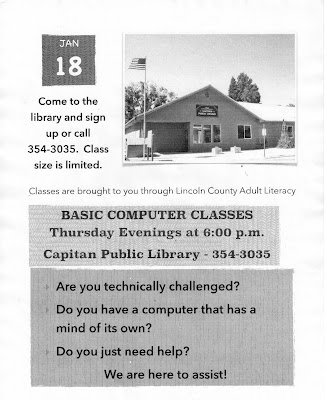 Classes begin January 18 from 6:00 to 8:00 pm. The free classes will run for 6 weeks every Thursday. Class size is limited so sign up soon.
Posted by Sharon @ the library at 2:28 PM No comments:

Holiday closures for the library 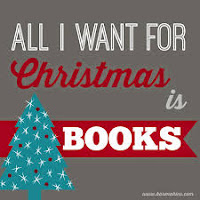 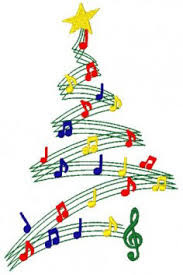 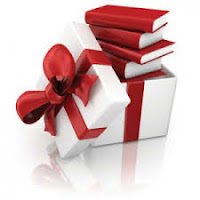 Posted by Sharon @ the library at 9:00 AM No comments:

Tamale making class at Capitan Library. Everyone had great fun inspite of the serious expressions. Each person got to take home their tamales. 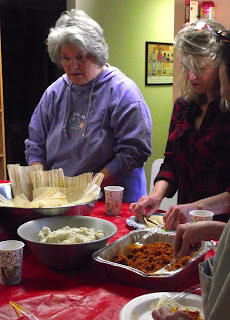 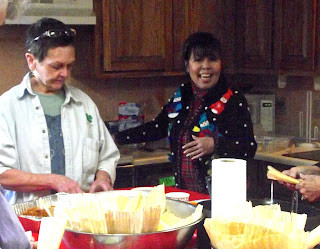 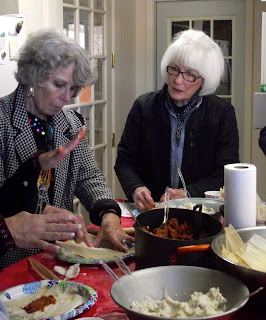 Each year in November, the Capitan Library conducts a fund raiser to support our volunteer library. All donations are tax deductible and go directly to the library.
Your donation can help us continue to have quality children's programs, new books for everyone and audio books and large print for those who need a little help. In addition, we provide public computers with internet, free Ancestry.com, copying and fax machines, DVDs, and tutoring in a variety of subjects (just ask!)
Thank you for your support! 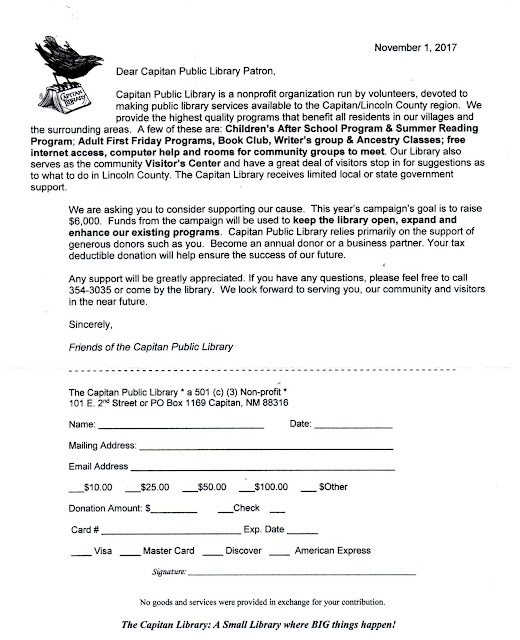 Posted by Sharon @ the library at 3:36 PM No comments:

Looking for a job?

We are looking for 11 workers to do solar labor installation in Carrizozo NM. The Job pays 12.00 an hr. Applicants will have to be able to pass a drug test/ back ground check, have steel toe boots, and they need to have one year of construction experience. Applicants can apply online at http://www.peopleready.com/construction . They will also need to take a survey, listed below.

If you have any questions, then please feel free to contact

Put a little holiday music into your schedule 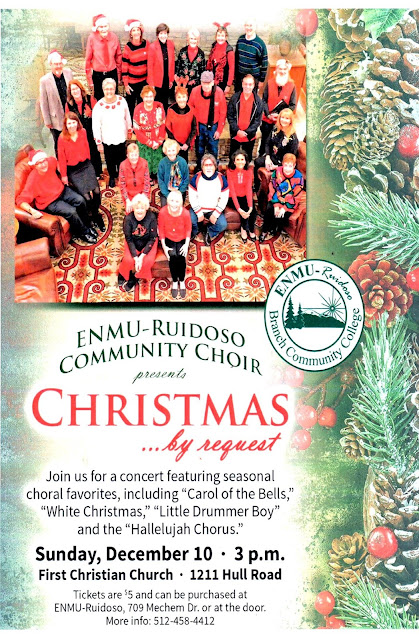 The club members will each bring their favorite children's book to share with the rest of the group for the December meeting.

Get ready for the New Year's meeting (Thursday, January 4) by reading:
Zero: The biography of a Dangerous Idea by Charles Seife

The Babylonians invented it, the Greeks banned it, the Hindus worshipped it, and the Church used it to fend off heretics. For centuries, the power of zero savored of the demonic; once harnessed, it became the most important tool in mathematics. Zero follows this number from its birth as an Eastern philosophical concept to its struggle for acceptance in Europe and its apotheosis as the mystery of the black hole. Today, zero lies at the heart of one of the biggest scientific controversies of all time, the quest for the theory of everything. Elegant, witty, and enlightening, Zero is a compelling look at the strangest number in the universe and one of the greatest paradoxes of human thought.


Note: February's book will be Sin Killer by Larry McMurtry

The first in a four-volume epic journey through the early American frontier, featuring the Berrybender family, English nobility adrift in the American West in the 1830s.
Posted by Sharon @ the library at 10:46 AM No comments:

It's a dancer's dream to perform exquisite classics in professional venues. For over seventy dancers, that dream becomes reality when Dali Ballet Company of Ruidoso presents Tchaikovsky's "The Nutcracker" Friday, December 8 at 7 PM and Saturday, December 9 at 2 PM and 7 PM at the Spencer Theater, north of Ruidoso.
Dali's dancers attain their dreams of lead roles after years of disciplined "working up" from corps du ballet.  Fans anticipate each year's "Nutcracker" to discover how dancers have matured into leads or soloists.  And because Dali's dancers are versatile, many perform different roles in one production.
This year's Clara and Fritz, Alora Shaver of Ruidoso and Matthew Rabke of Capitan, both performed in previous "Nutcrackers" as well as other Dali ballets. In addition to their lead roles, Alora will also dance with Snowflakes and Matthew with Toy Soldiers and Candy Canes.
"Waltz of the Flowers" leads are Kaylee Hall, last year's Clara, and Anya Rabke, last year's Ballerina Doll. Kaylee leads Marzipan, is a Snowflake, and demi-solos Arabian with Gaby Martinez, who also dances Snowflakes and Waltz of the Flowers.
Anya also dances Arabian, Marzipan and Snowflakes.
Emily Musgrave interprets Rat King for the first time this year. In Act II see her versatility in Arabian, Snowflakes and Waltz of the Flowers.
Emily Hutchison is a seasoned performer of several "Nutcrackers." See her versatility as Spanish Dancer lead as well as in Marzipan, Snowflakes, Waltz of the Flowers and Arabian.

Courtney Daniels performs Dew Drop Fairy, one of many leads she has danced in many "Nutcrackers" since the age of five. This year she also leads Arabian and dances with Snowflakes and Spanish Dancers.
Joey Garcia reprises Uncle Drosselmeyer in his third "Nutcracker" and has performed in numerous Dali productions.
Saddie Hillburn and Zoe Hillburn dance Nesting Doll leads.
Ashtin Bright leads Candy Canes and dances Snowflakes, Marzipan and Waltz of the Flowers.
Mia Simpson solos as Gypsy Doll, understudies Clara, and also dances Chinese and Snowflakes.
Z'maury Zamora delights as the comedic Jester Doll and dances Chinese.
Hannah Anderson interprets Ballerina Doll and appears in Chinese.
Kathryn Paulos brings exuberance as the Chinese lead and dances Spanish, Waltz of the Flowers and Snowflake.
Brianna Leach solos Gingersnap and dances Marzipan, Snowflakes and Waltz of the Flowers.
Although not an artist or dancer, "ballet dad" Robbie Hall reprises his comedic turn as Mother Ginger whose ample skirt hides little Polichinelles.
Tickets are still available for this weekend's production. Call the Spencer Theater at 575-336-4800, or visit www.spencertheater.com.

Posted by Sharon @ the library at 6:54 AM No comments:

What's up with the weather? Where's the snow?

On Tues, Dec 5, 6pm at ENMU come find out more from those in the know. 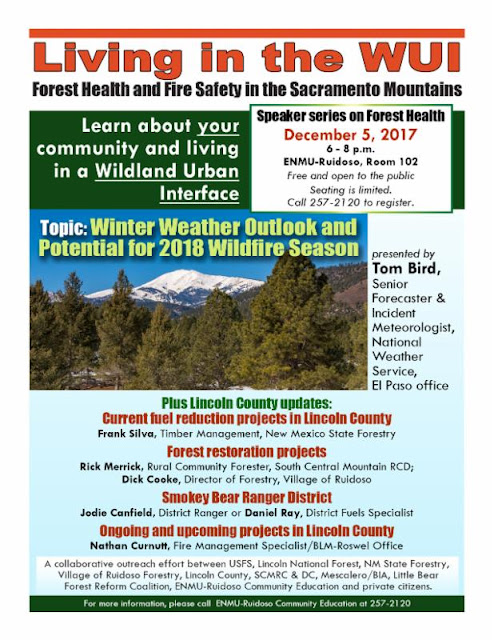