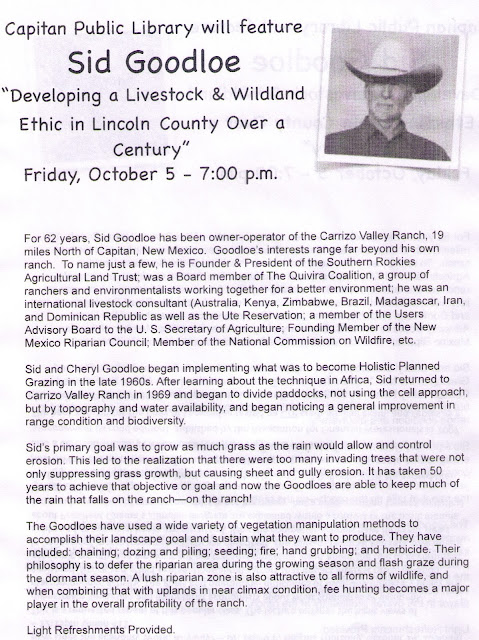 Posted by Sharon @ the library at 6:23 PM No comments:

Turn out and vote to receive our new "I Voted in Lincoln County Sticker"! 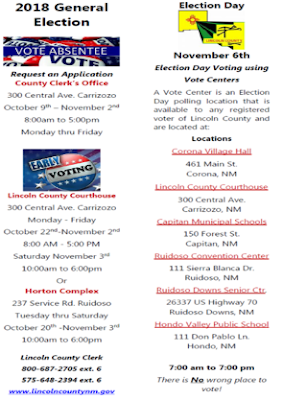 Posted by Sharon @ the library at 1:39 PM No comments:

Are you listening to me?
The theme of this meeting is to learn all we can about hearing loss, what it means, what to do about it, how to pay for it ,and that maybe it is not a very good idea to ignore it! Please bring all your questions and stories.
Remember a potluck breakfast is awaiting. Bring a favorite food and maybe even a donation? We did well last month and we continue to be able to provide some foods and coffee, just not enough for everyone.
Friday, September 21. 9am breakfast, 10 program. Come early and sit up close if you can not hear well! 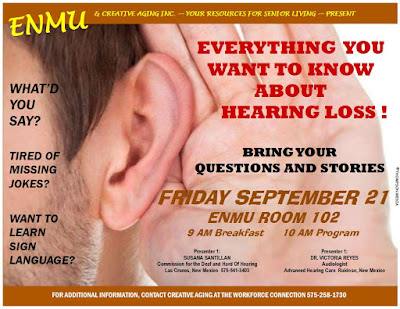 Being Mortal book discussion by Atul Gawande will be held by Creative Aging at ENMU on Friday, September 28 at 3pm, #102.
Guest speaker is David Gerke. Refreshments will be served.
This discussion will focus around end of life decisions. It is not just about how people die, but what do they want when they die?
Flyer attached.
Personally I have learned a great deal from this book I find it empowering and helpful to alleviate some of my fears.
Clara Farah, 575.973.7835. clrfarah@gmail.com 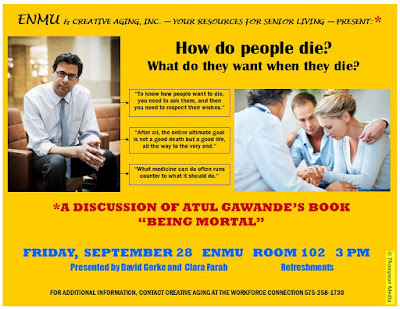 Posted by Sharon @ the library at 1:34 PM No comments:

OTHER book clubs favorite reads. Posted because they had TWO of my favorite books.

What is your book club currently reading, and how do you choose your next book?
Our book club is currently reading A Gentleman in Moscow by Amor Towles. We had read Rules of Civility by Amor Towles and the leader for the next meeting received many recommendations from friends in other book clubs for this book. The leader for the next meeting determines the next read — usually it is a recommendation from a reliable friend or family member, one they read and enjoyed, or from researching books that might be trending.

What are a few of your group’s all-time favorite books and why?
Most would say the very first book we read was their favorite — Moloka’i by Alan Brennert. The reason being that not only was it an interesting read, but all were able to escape to somewhere different and learn about culture and history that they had not been familiar with before.
Another book that had an impact was We Need to Talk About Kevin by Lionel Shriver. Many of us had school-age children at the time or were teachers, and the story’s [depiction of the shooting’s] impact on parents, family, and the community was powerful. We read this book well before this type of thing seemed to be more prevalent.
Cutting for Stone by Abraham Verghese was another favorite — similarly to Moloka’i, it was a great escape to another culture and a great story. The Art of Racing in the Rain by Garth Steinhit a chord with the many animal lovers in our book club, and was also memorable.
What book sparked a particularly lively discussion?
There have been many that sparked lively discussion, but this one stands out as one of our most recent reads — Little Fires Everywhere by Celeste Ng. [We had] conversation around how we would have handled a similar situation, the characters, and the outcomes. [There were] definitely varying opinions.
Posted by Sharon @ the library at 2:48 PM No comments:

Monday: Sept 17 10 am to noon Medicare presentation.  Need to know what you need?  This presentation will help you. 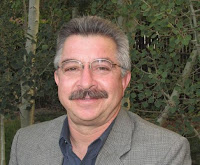 Mike Katko was a teacher, coach and yearbook developer for Capitan High School in 1988. He has also been a soldier, small business owner, construction worker, and a school principal with 17 years of experience, and the current Chairman of the State Board of Occupational Therapy for New Mexico. Katko is an avid skier, radio and public address announcer for high school sports. “Flunking” retirement, he is employed with UNM in Los Alamos as a Program Coordinator.

An aspiring writer of poetry, his “Skies and Other Poems” was published in 2012.  A soon to be released historical novel, “Big Medicine Pretty Water” will be explored. He lives with his wife of 30 years in Los Alamos, New Mexico and their dog, Bailey.

Katko will be reading from his book, “Skies and Other Poems” and previewing publicly for the first time, “Big Medicine Pretty Water.”

Books will be available for purchase.

Light refreshments will be provided.
HEAR MORE AT :
https://www.youtube.com/watch?v=IQhkH689yik
Posted by Sharon @ the library at 7:01 AM No comments:

Come shop till you drop! 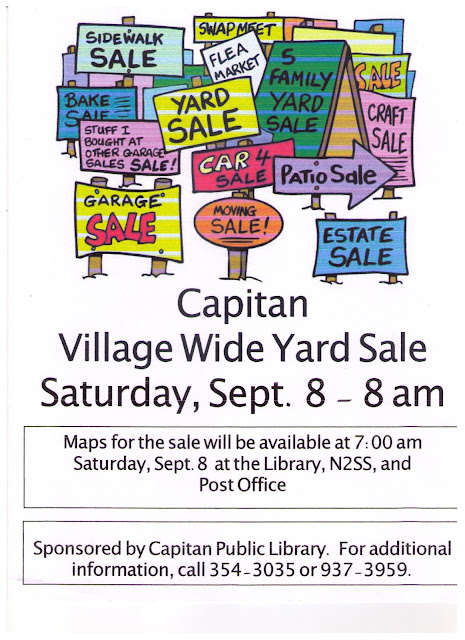 Posted by Sharon @ the library at 6:35 AM No comments: 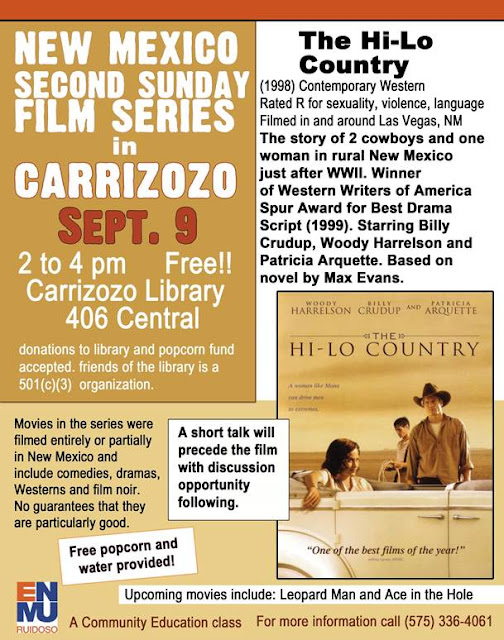 New Mexico Humanities Council series on FAKE NEWS. LOOK! It is our own Jim Spiri from Lincoln. He spoke at a Capitan Library program last year. 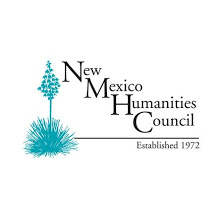 The September Fake News: Journalism Goes to Hollywood feature film will be "Salvador," Oliver Stone's 1986 tale based on the real-life adventures of unconventional journalist Richard Boyle, who finds himself caught up in the vicious political strife in the Central American nation of El Salvador in the early `80s.

This FREE program is part of the Democracy and the Informed Citizen Initiative, administered by the Federation of State Humanities Councils. We thank The Andrew W. Mellon Foundation for their generous support of this initiative and the Pulitzer Prizes for their partnership.

read more...
Fake News: Journalism Goes to Hollywood is a film and discussion series hosted by Devin O’Leary, chief film critic at the Weekly Alibi. Following screening of the feature film, O’Leary and a guest reporter or scholar will explore how journalism is represented through cinema. The series examines the role of the press in democratic societies and invites the audience to engage in conversation with the guests about the future of journalism.
Fake News: Journalism Goes to Hollywood takes place once a month on Sundays at the KiMo Theatrein Albuquerque. The series runs through November.
Devin D. O’Leary has served as the film section editor and chief film critic for the Weekly Alibi newspaper in Albuquerque, NM for 25 years. Last year, he took over as the paper’s managing editor. He has been the booker and host for Midnight Movie Madness at Guild Cinema since 2002. He was the founder of the Alibi Short Film Fiesta and served as its curator for 10 years. Mr. O’Leary spend the summer of 2008 in Hong Kong co-teaching a class on the history of Hong Kong film to a group of filmmaking students from New Mexico State University. He has written and produced four independent feature films here in New Mexico.
This FREE program is part of the Journalism, Democracy and the Informed Citizen series made possible by the “Democracy and the Informed Citizen” initiative, administered by the Federation of State Humanities Councils.  The initiative seeks to deepen the public’s knowledge and appreciation of the vital connections between democracy, the humanities, journalism, and an informed citizenry.
SALVADOR
Sun, Sep 23, 2018, 2:00pm - 5:00pm
Kimo Theatre, Central Avenue Northwest, Albuquerque, NM, USA "Salvador," Oliver Stone's 1986 tale based on the real-life adventures of unconventional journalist Richard Boyle, who finds himself caught up in the vicious political strife in the Central American nation of El Salvador in the early '80s.
SALVADOR PANELISTS
Dr. Kimberly Gauderman joined the University of New Mexico History Department in 1998. She teaches a variety of courses focusing on early and modern Latin American history. Reflective of her research interests and her concern for social justice and human rights, she also has served as an expert witness on country conditions in Latin American asylum cases since 2010. She works with attorneys across the country on behalf of refugees from the Andes and Central America. In her asylum work for El Salvador, she focuses on the impact of gender, sexual, and gang violence on women, children, and LGBTI persons.
For over 30 years Richard (Rick) Kozak covered the United States and the world as a photojournalist. The majority of those years were with the Washington Times Corporation. Honored for his excellence in photojournalism by the White House News Photographers Association, Kozak was awarded “Picture of the Year” in 1985, 1986, 1987, 1989 and 1990. He became Senior Staff Photographer in 2004 with Army Times Publishing, a Gannett Corporation Publication, covering the escalating war in Iraq. Wounded in 2005 while embedded with the military, he suffered a 30% hearing loss. He returned to the front lines with the Marines two days following his injury and over the next three years he would continue to return and cover combat areas in Iraq and Afghanistan.
After making several journeys to El Salvador between 1987-1989, Jim Spiri and his wife, Candi, published a photo documentary called, "In the Beginning....El Salvador". In 2007, Jim was invited in by the U.S. Marine Corp to spend time in Fallujah, Iraq, a well known hot bed of insurgent activity during the war years in Iraq. Eventually Jim embedded with numerous Marine units as well as Army units all over Iraq and across a number of areas on Afghanistan. He is currently planning a follow up journey to El Salvador to chat with members of the Army of El Salvador whom he came across in Iraq years ago. Some of Jim's work can be viewed at www.jimspiri.com.
Contact Info: NMHC at (505)633-7370 or KiMo Theatre at www.kimotickets.com
Posted by Sharon @ the library at 7:35 AM No comments:

FREE clothing this weekend and next weekend 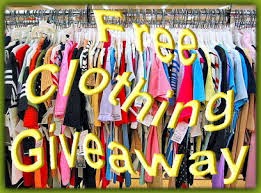 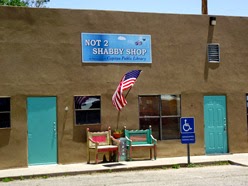 BUT remember, the N2SS supports YOUR Capitan Library, so feel free to donate something to show your appreciation for the Library AND the Not Too Shabby Shop!
Posted by Sharon @ the library at 7:30 AM No comments: