(I am taking the liberty to edit some of the article, since the book sale has passed- Sharon at the Library) 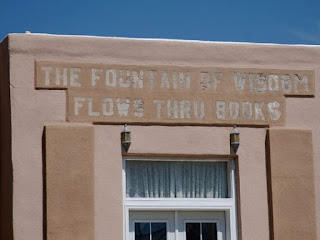 The book phase, “The Fountain of Wisdom Flows Thru Books,” can be seen on a 1937 WPA building near the future CCPL&A site where book lovers will actually be congregating in 2017. (Photo: Courtesy/Polly Chavez) 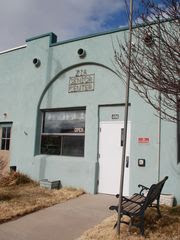 This former blue building, once the home of Zia Senior Citizens Center, is now going to be the site of Carrizozo Community Public Library and Archive (CCPL&A). Friends of the Library and volunteers are working diligently to open in 2017. (Photo: Courtesy/Polly Chavez)
Board members of CCPL&A and Friends of the Library have been devoted to establishing a library in Carrizozo. The board is comprised of Chery Mehalko (chair), Cheryl Barnett (secretary), Jean Templeton Morris, Anne Serna, Martha Proctor, and Shelby Hyatt. Diane Dean serves as interim director. They have thanked the mayor and trustees for unanimously approving the sole use of the former Senior Citizens Center.

An actual date for the clean up and bookstore move to the old senior center will be determined when the county has vacated the premise completely. CCPL&A and Friends of the Library have toured the almost vacant building.

The touring group included board members of the Lincoln County Historical Society (LCHS), who have made plans to move their headquarters from Lincoln to the library. The LCHS move to Carrizozo (county seat) will allow historians to research just within a block of the Lincoln County government offices.
“The Fountain of Wisdom Flows Thru Books,” is engraved on building just doors away from the upcoming CCPL&A location. The building once housed a book depository when one county superintendent managed county schools. The building was a 1937 Works Progess Administration (WPA) project.

Now the book phrase on that building could be rightly applied instead to the neighboring building that will house CCPL&A. Eager readers are waiting for the doors to open in 2017 at the former senior citizens building.
Posted by Sharon @ the library at 11:54 AM

Only patrons of the Capitan Public Library may comment to blog posts.